Most people will now know about the elusive Chip purses and mug’s that were popping up in Primark stores here in the UK and instantly selling out and appearing on eBay moments later for three times the retail selling price. However, when Primark announced they would be re-releasing more of them in May, everyone got super excited again; including me! Again, they sold out pretty instantly; but I was lucky enough that I just happened to be online on a Facebook group that offers pick ups from the stores just as they put up a post where you could sign up to be on the list for getting one off the people doing pick ups. The rule was that the people who were getting them had to go down the list and offer them to people in the order they commented and by some miracle, I was number 8 on the list of around 200+! So, I was very lucky that I was high up the list enough that someone was able to offer me one and of course, I snapped him up!

He just arrived today and he is just so adorable! Mine has a little chip (no pun intended!) on the gold paint on his handle but its not too bad and I edited it out for the photo below. I got off lightly too as there were reports of so many of them being very badly damaged with loads of the gold paint missing off the handles and rims; and even reports of some that didn’t even have a face! Clearly they were rushed out by Primark pretty quickly to keep up with demand which is a shame as I’m sure people would have been patient to wait a little longer if it meant there were less imperfections. Anyway, as I said, mine isn’t too bad. I’ve been told that basically, he can’t be washed though otherwise the gold paint comes off, so I guess I won’t be using my little guy for any cups of tea! So, I did the next best thing, and filled him with Galaxy chocolate counters instead XD 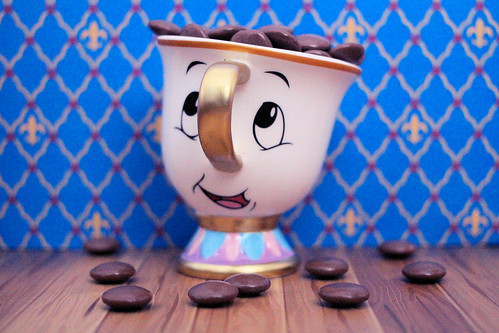